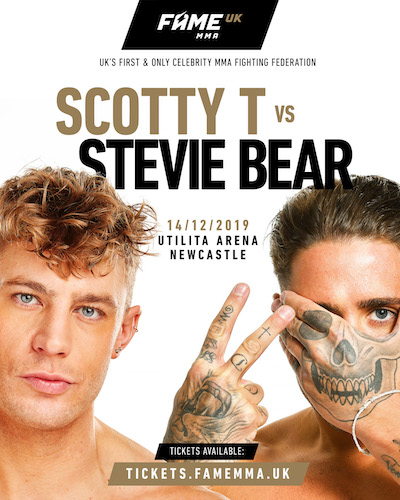 Get ready to rumble! as Geordie Shore's Scotty T will be fighting Ex On The Beach's Stevie Bear at Utilita Arena, Newcastle on Saturday 14th December 2019 at FAME MMA.

To launch the UK's first and only Celebrity MMA fighting federation, after its success in Poland; FAME MMA will be hosted by superstar DJ Charlie Sloth with Scotty T and Stevie Bear going head-to-head to battle it out in the cage. It's set to be an evening of pure entertainment in the fights and in the arena, so book tickets now and witness a night which won't be forgotten.

PLUS, we've teamed up them to give you the chance to win Exclusive VIP tickets to the fight night and £250 to enjoy food and drinks in Newcastle before the main event.

Check Out The Future Fighters

Get to watch some of your favourite reality TV stars and Youtubers mix it up in the cage. You will see the likes of Sam Gowland, Marty McKenna, Georgia Harrison, Joel JMX and Nightscape, fighting for real, not clout!

So check out who will be stepping up to the challenge and getting ready to claim the title!

Unfortunately, this promotion has now ended.